The spread of the covid-19, which has become a historic pandemic (a global pandemic). It has been more than half a year since this infection became apparent, but it still has a strong impact on society. Naturally, the world economy has been greatly affected, and the situation is still serious and no vaccines or cures are ready and the instability in financial markets is set to remain for a while. So, let’s look at how this “new normal” has affected the global economy and the stock markets.

Slow reopening of the economies

First, let’s take a look at the current state of the world economy. The number of people infected with the new coronavirus in European countries has finally been on the decline. In response to this situation, Italy and Spain, which suffered many deaths, have begun preparations for the resumption of the tourism industry, which is a major industry. International flights have already begun in three major cities in Italy. The border blockade has also been lifted. Spain has also announced that it will accept foreign tourists from July 1st.

In contrast to Europe, South America is currently spreading. The situation in Brazil, Peru, and Chile is particularly bad, and among them, Brazil has the second highest cumulative number of infected people in the world, and the increase in infection cannot be stopped. In North America, Canada is beginning to calm down, but in the world’s most infected United States, intensifying demonstrations of discrimination are increasing people-to-people contact. Therefore, it is suggested that the second wave may come in the future. As you can see, the situation in the Americas is still serious, and there is no clear path to normalization of economic activity.

What is the status of infection in Asian countries, including Japan, and what is the move toward resuming economic activity? As you know, the number of infected people is decreasing nationwide. We are regaining normal economic activity. In addition, China, which has the largest economy in Asia and was the epicenter of this new corona, seems to have succeeded in suppressing it as a whole according to the announced figures. While many other Asian countries have succeeded in containing the new corona, the number of infected people in India is currently increasing. Since the Indian economy is the sixth largest in the world, if the spread of infection continues as it is, it may have a great impact on the world economy. 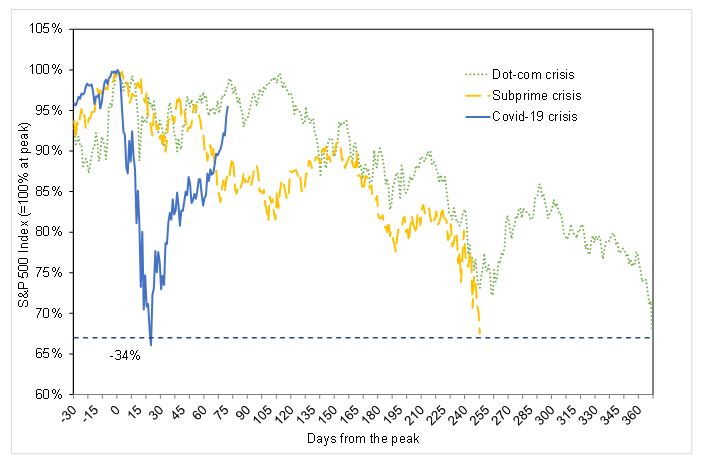 Impact of the Covid-19 on the stock market

This new coronavirus has spread all over the world and has had a great impact on the world economy. That meant that it had a huge impact on the global stock market, and the actual plunge in the stock market due to the impact of the new Corona in mid-March was comparable to Black Monday and the Lehman shock. However, as in the past crash, the stock market rebounded after the crash. The world’s major stock markets, such as the Dow Jones Industrial Average and the Nikkei Stock Average, are now returning to levels around February before the plunge. However, since the current stock price is divergent from the real economy, many experts think that it is a “corona bubble,” and the situation continues to be alert. It is rebounding a bit in May, and this could show that the situation is stabilising.

In addition, the once calm VIX index is rapidly increasing again. This means that investors’ fears remain deep-rooted, suggesting that a small negative factor could cause the stock price to fluctuate significantly. Therefore, the nervous market will continue worldwide for a while.

Today, stock markets around the world are hypersensitive to negative factors, and so is the Asian market. The Nikkei Asia 300 Index, which is an indicator of the Asian economy as a whole, once showed an upward trend, but in response to the US stock market that plunged due to concerns about the second wave of the new corona, it has continued to decline in June. I will. In addition, neither Japan nor China, which should drive the Asian economy, are doing well. Japan has been disappointed with the government’s economic measures, and China has problems with secondary infections and Hong Kong, which has failed to give investors a sense of security.

About the exchange rate

Finally, let’s touch on the exchange rate. The exchange rate has fluctuated sharply since the latter half of February, but it is now seemingly calm. However, the uncertainties in the future have not been resolved, and the situation will change significantly depending on the following factors:

With monetary easing taking place worldwide, it is undeniable that carry trades are declining. Pairs of stable currencies, the dollar and yen, with emerging market currencies will become the center of foreign exchange trading. Until the US presidential election in November, market uncertainty is unlikely to be dispelled.

What Are The Different Types Of Forex Trading Strategies

How Does Money Market Hedge Work